Hail Stevia!
Savvy Americans are awakening from a slumber of blind-trust after discovering the white sugar they’ve been eating is a proven human toxin; not the least compatible with the needs of the holy temple’s biochemistry. Ergo plagues of diabetes, hypoglycemia, hypertension, elevated cholesterol and triglycerides, increased arterial plaque, immune suppression, insulin resistance, obesity, H1N1 and heart disease freely loiter about a once-healthy citizenry. Bluntly, sugar sucks.
Subsequently, enlightened Americans seek rational alternatives to sugar and trustingly reach for the omnipresent pink, blue, and yellow packages of sweet death. When shopping, strut by the Sweet and Low, made from succulent coal tar, skip the tasty neurotoxin Nutra-Sweet, then waltz past deceitful Splenda; another abomination of a loving cosmos’ creations. Jim Turner, Chairman of the Board of the Health Advocacy Group Citizens for Health describes varying degrees of gastro-intestinal problems resulting from Splenda use. "... from irritation all the way up to serious bleeding ulcers requiring surgery," says Turner. Other health professionals report cases of cardiac problems, various allergic reactions. Instead, grasp a friendly green box of Sweet Leaf Stevia. All others fall short, since they are chemically altered.
Stevia was discovered by 16th century by Spanish Conquistadors who learned about stevia from the local Guarani and Mato Grosso Indians who used stevia leaves to sweeten their medicines and teas. Unfortunately, it’s only recently become available to Americans. Think of stevia like oregano or basil; however it leaves a sweet taste. No need for processing.
Modern scientific interests in the Stevia plant dates to the early 1900’s, however sugar lobbyists fought hard to keep their addictive, Diabesity-inducing, immune-suppressing crystal crap on the shelves in a mind-numbing constellation of processed food sludge. White sugar is irrefutably addictive, wielding its insidious power over the brain similar to opiate drugs of abuse.
The average portly, diabetic and constantly-sick American eats nearly 150 pounds a year. (Visualize 15 ten-pound bags). Overindulgence; sugar be thy name.
Caveat Emptor; we won’t get fooled again! Truvia is not the real thing baby. Truvia is another monstrous contrivance from the nutritional terrorists at Cargill whose total indifference regarding the wellbeing of their fellow countrymen borders treason. ‘Truvia’, also known as rebiana, is made by taking the best leaves of the stevia plant, drying and soaking them then isolating the active compound. In a moment of false hubris, the damaged bullies at Cargill Corporation felt God-like and altered Stevia’s original molecular structure, marking its turf like a dog to own it outright; God weeps at such selfish superiority. Why can’t man leave God’s work alone? Sweet Leaf’s founder, Jim May told me Stevia is made with only two ingredients; inulin, a natural vegetable fiber and Stevia leaf extract. Inulin is beneficial to good digestive health as it stimulates the growth of good intestinal flora supporting immune function. Sugar, the pink, blue and yellow death offers no health recompense.
Unlike sugar, no health issues have been reported, that is, unless you eat 4 pounds a day and rub it all over your body then snort it. Indigenous Japanese, where Stevia’s very common, accepted sweetener, have safely used stevia for generations. Alternatively, sugar trashes our immune system. Do you smell what I’m cookin’?
With diabetes and obesity a huge financially-depleting national health problem, none of you dear readers deserve to innocently put anything into the temple that comprises health. Health is about food, not synthesized doo-doo. Yes, it’s getting creepy out there. More and more we’re reading newspaper and TV reports revealing yet another product we trusted is, alas, seasoned generously with immoral corporate greed. Knowledge is power.
Posted by Eat Right Now with Chef Wendell at 3:59 PM 3 comments:

(Gluten-free) Flourless Pumpkin Pancakes w/Homemade Blueberry Syrup
Over the last 50 years Celiac Disease has become much more common, affecting 1 out of 100 people. Doctors attribute this increase to changes in our environment and processed food-like substances alien to human physiology. (Mayo Clinic)
Celiac Disease is our immune system reacting to gluten in the diet by attacking villi in the small intestine where nutrients get absorbed A gluten-free diet is a must for people with celiac disease or an allergy to products containing wheat. Unfortunately, it goes largely undiagnosed.
It's not so easy being gluten free. Not only is gluten found in grains like wheat, barley, oats and rye, it's also added to many foods as a thickening agent. For example, some ice creams and even ketchup contain gluten. The simple solution: avoid wheat products and processed foods made with processed wheat.
At home Sandi and I prepare these fiberlicious, healthy and non-gluten pancakes for the family. If you’re discreet and don’t shine a floodlight on the change, no one will notice because they taste so darned good. Recently we’ve begun adding organic pumpkin puree and ground flax seed to goose up the nutrition, fiber and omega 3 essential fatty acids.
Please avoid Aunt Jamima Pancake mix as well as her Syrup. The pancake dry-mix brims with aluminum anti-caking agents, refined white flour (the villain) and the ‘syrup’ is composed of harmful High Fructose Corn Syrup and yummy artificial flavorings. Opt for the real thing. You and your loved ones deserve the best. Instead of artery detonating butter, try Smart Balance omega 3 fortified butter substitutes.
This scrumptious recipe yields many little pancakes or several biggies
Ingredients:
Gluten-Free Pancake Mix (Bob’s Red Mill & Hodgson Mills @ Grocery)
4 organic egg whites
1/3 cup of pumpkin puree
2 tbs. ground flaxseed meal (use a coffee grinder)
½ cup chopped walnuts
½ tsp of ‘real’ vanilla extract
1 tsp of cinnamon and a pinch of nutmeg
Directions:
Whisk the egg whites till lightly frothy.
Warm up the skillet or griddle to medium high heat
Per instructions, in a large bowl, mix spices and incorporate together with a wire whisk
Work in the egg whites, pumpkin puree, flax, walnuts and vanilla.
Lightly spray a griddle or pan and cook at medium heat.
Flip them only once when you see the first tiny bubbles form.
While the pancakes are browning, over low heat, gently warm the ‘real’ maple syrup.
Shut off the heat before it comes to a boil then add 1 cup of fresh or frozen blueberries.
Set aside
Serve immediately topped with your fresh, homemade blueberry syrup.
Posted by Eat Right Now with Chef Wendell at 8:25 AM No comments: 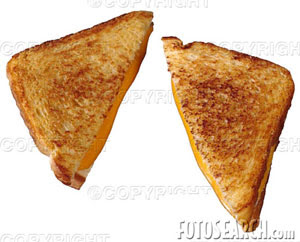 Everyone loves the traditional American Icon, the Grilled Cheese Sandwich and tomato soup. We grew up on them with a steaming bowl of salty canned tomato soup. Well, how’s that working out for you? If you still make them with white bread, butter and Velveeta, well, you might consider altering the ingredients a bit to render this artery clogger a pleasantly satisfying, healthful lunch.
The processed white bread spikes blood sugar levels encouraging diabetes and contains nothing of any nutritional value. The Velveeta cheese is nothing but oil and then there’s the butter - well, you know.
This new version using Smart Balance, Soy Cheese and Whole Wheat Bread fools even my toughest critics; the grandkids. Simply don’t make a big deal of the change and no one will notice. Serve the sandwich with carrot, celery, radishes or broccoli pieces and buy BOXED soups in the healthy section of your grocers. Pacific brand is lovely. Brand name sops contain astronomical amounts of salt plus the interior lining of canned foods from coast to coast have been discovered to contain BPA; a carcinogen.
Prepare the classic sandwich in the traditional manner, over medium heat. You’ll be quite pleased.
Ingredients:Smart Balance MargarineEzekiel Bread-Loaded with fiber and proteinCarrot, celery, broccoli or asparagus spears as garnishGalaxie Brand Soy cheddar Cheese SlicesOrLow fat cheddar
Posted by Eat Right Now with Chef Wendell at 5:33 AM No comments: