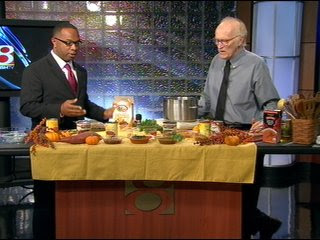 Here are a few ways to 'kick up' your favorite canned or boxed soups:

Is it healthy to eat soup in the can? Actually, the kitchen table is more civilized.
Canned soups can taste rather boring, don't you agree? Actually, they all often taste the same. This is a trade off for convenience. Historically canned foods were a Godsend to many war torn countries and busy American families on the fly. Once food is cooked, however, it gradually begins to lose its nutritional equity and becomes empty calories. If you recall, most of the vegetables are cooked to nutritional oblivion. Call a paramedic, please. For decades we've added cans of soup to casseroles and entrees.

Eat Right, Now! suggests that you add exciting new ingredients to your cans of store bought soup. Learn how to rev up soups with more fresh ingredients. For decades, we've depended upon canned foods when we are in a hurry. Many mainstream soups and baby foods on the grocer's shelves also contain harmful amounts of salt, high fructose corn syrup, MSG, and other ghastly preservatives that deteriorate our good health. Read the labels and avoid soups with high sodium content. Also, many soups are prepared with the insidious High Fructose Corn Syrup. Don't let any advertising tell you otherwise. HFCS is unnatural to our physiology and raises triglycerides, and causes obesity. Check it out. (http://www.westonaprice.org/modernfood/highfructose)

According to Food and Drug Administration (FDA) 17% of the typical American diet consists of canned foods. Does canned soup offer any nutritional benefits? Does the can lining leach into the soup if it has been on the shelf for a while? If so, does the canned soup lining leach any controversial chemical BPA into the soup? After food sits in a tin can for a period of time, it loses its nutritional oomph and absorbs the leaching BPA from the lining.
(www.naturalnews.com/021761.html)

Pacific Foods Brand Roasted Red Pepper and Tomato is exceptional. I even like to spike it with sherry and low-fat sour cream occasionally. Probiotic yogurt does the same with less fat.Select canned foods from makers who don't use BPA, such as Eden Foods (http://www.edenfoods.com/), Muir Glen Brand which both sell certified organic canned beans and other foods. (http://www.muirglen.com/) Pacific Foods Brand.
Peace,
Chef Wendell
www.wendellfowler.com
Posted by Eat Right Now with Chef Wendell at 9:36 AM 2 comments:

Labels: No BPA For You

Chefs are the Doctors of the Future

Chefs are the Doctors of the Future
Published September 25th, 2008

The South Side Times
www.ss-times.com/
By Wendell Fowler
Hippocrates, the father of medicine, was right-on when in 400 BC he declared: “Let food be thy medicine and medicine be thy food.”
After my loyal 15-year-old yellow lab died, I deeply grieved and became emotionally intoxicated on an unfamiliar level. We spent nearly every day of her life together; even vacations centered on the beloved family member. Just recently, however, I discovered that I was being overly medicated by my family physician. Psycho therapeutic drugs, like antidepressants and sedatives, have nearly doubled from 671 deaths to 1,300. Adios to drugs that took me out of the game and hello to food as medicine.

Americans have innocently entrusted their health to the family physician. Like healing a sucking chest wound with a bandage, drugs are their first line of defense. As we’ve learned, man-made drugs are not the answer, just a temporary fix. In high school, we read Brave New World, by Aldous Huxley, which predicted that the final battle Americans will fight will occur between the pharmacopeia and ourselves.

It’s quite confusing when doctors eagerly scribble your family members a prescription for a drug that is addictive or might destroy you. You’ve certainly observed the appalling TV commercials for drugs? Holy pill, Batman! My physician was numb to the long term effects of taking such medicine. Without my knowledge, I had lost my mojo; my skin was constantly in a rash, and my mind struggled to reach its potential. Ironically, upon graduation from medical school, future doctors are required to take the Hippocratic Oath; …to first, do no harm.
After working in kitchens for 35 years and playing lots of sports, my knees are shot — bone-on-bone pain. I became cozy with mild pain killers. They temporarily did the job, but experts discourage their long term use. I don’t know about you, but they made me feel creepy, cranky and jumpy. Then I read about the anti-inflammatory virtues of the spice turmeric and fresh ginger. Gradually I introduced them to my family’s diet. Shortly thereafter, I was able to dose down off the caustic anti-inflammatory chemicals by employing God’s salubrious apothecary, the produce aisle.

Every earthly, colorful plant food is a source of universal healing energy and disease-fighting phytonutrients. Your Holy Temple reacts to food as sensitively as a synthetic drug. Where do you suppose drugs come from? Unprocessed, whole plant foods, were created to work most effectively. Remember, the whole is equal to the sum of its parts. 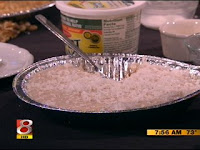 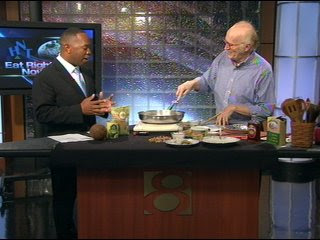 In a 350° oven toast the coconut on a cookie sheet pan for 5 or 6 minutes. Don't walk away. When it becomes brown on the edges, watch carefully. Stir and set aside.
In a small mixing bowl, stir the 1/3 cup of coconut milk into the cornstarch. Use a wooden spoon and press out any lumps.
In a small sauce pan, gently add the remaining 2 1/3 cups coconut milk, salt and syrup.
Whisk in the cornstarch slurry, stirring constantly over medium high heat until the mix comes to a full rolling boil. Simmer on low for a minute or two.
Remove from the heat and stir in the toasted coconut.
Pour the filling into the crust and sprinkle with remaining toasted coconut for garnish.
Refrigerate before serving. The filling will slowly thicken as the creamy mix cools and sets.

Let Nature Nurture with a Full Flavored Dessert that Flatters the Waist Line and Satisfies the Appetite
Almonds are low in saturated fat and contain many other protective calcium and magnesium - for strong bones, vitamin E and compounds called phytochemicals, which may help protect against cardiovascular disease and even cancer.Wikipedia says that Coconut oil is one of the most stable oils you can buy. It does not turn rancid easily. It does not attack your arteries. If it is hydrogenated or processed, it becomes unhealthy. In fact, coconut oil was one of the foods Weston Price studied in his journeys. He discovered that the coconut was considered, by the local populations, a medicine food. Weston Price found that those civilizations that consumed coconut regularly had no knowledge of cancer, heart disease, arthritis, and diabetes.
Spectrum Brand has a Virgin coconut oil that is perfect not only for cooking, but for your skin. http://www.mnwelldir.org/docs/nutrition/coconut.htm
Posted by Eat Right Now with Chef Wendell at 5:22 AM No comments:

Locavores: Good Home Economics
Like looking from the moon to the earth, it often takes a step back, observing others in a different perspective, to see the economic big picture. Life is indeed a voyage long and strange.
Freshly returned from a week in bucolic Vermont, I had an epiphany of sorts when I observed that nearly everyone eats organic, locally produced produce, meats, cheeses, local homemade creations, and clothing. It’s good to spend money locally to support the economy. And, honestly, I looked high and low for folks who were overweight. It was darned hard.
Everywhere I stepped, Locavores thrived. (Oxford American Dictionary ‘Word of the Year’, 2007). Don’t mistake me; these people are far from poor. I witnessed local businessmen and women, doctors, bankers, housewives, purchasing lovely second hand clothing at the local thrift shop. As one giggling 95 year old gal took a line from a Bogart movie,” We don’t need no stinkin’ over-priced, department stores.” They are a thrifty bunch of Blue Bloods, indeed. Also, recycling clothing is as standard to them as recycling left-over’s, cans, bottles, plastic, and McDonald wrappers that affront our glorious Blue Planet.
A Locavore is an enlightened culinary adventurer making an effort to eat only foods grown or harvested within a 100 mile radius. As we’ve discussed before, local produce has been scientifically proven to contain more Universal nutrients and significantly less chemicals. If you mention the term GMO (Genetically modified) in Vermont, you’ll receive contemptuous glare.
Man cannot improve on the bounty that our Universe has unselfishly bestowed. If it’s from nature, let it nurture your mind, body, and your spiritual walk.
What makes this all successful without prices skyrocketing is local support. My brother and I spent one afternoon picking 12 pounds of blueberries off the vine; still warm from the afternoon sun. We saved 40 bucks and created an enduring memory communing with nature and beloved family. How special is that? Plant a Victory Garden for the future, or seek out U-Pick Em’ farms. Take the kids too so they discover where food originates. We picked and arranged them on sheet pans, placed them in freezer, and then stored them in zip-locks for the winter.
From what I read, affordable, local sustainable agriculture is the future. As energy cost increase, no longer will we be able to afford produce shipped from a source 2000 miles from home. Those products were picked before maturation; therefore contain less of the nutrients such as Folate and Selenium. Anytime you pluck food from the vine prematurely for monetary gain, nutrient content suffers. We’ have to eat three times the amount of produce today to get the same amount of nutrients we received 30 years ago from that same produce.
Mono-crop farming does not allow farmland to go fallow which regenerates the soil; the way God planned it. I come from a heritage of farmers and I’m certain our Grandparents would be saddened if they knew that today, fossil-fuel based fertilizers are used in Factory Farms to re-nourish the good earth. It goes against Nature to think costly prescription drugs are better than the act of pro-active whole foods prevention. Health is about our Celestial Apothecary, your garden, not liver stressing drugs.
Hippocrates, the father of medicine, was right on the ole’ button when in 400 BC proclaimed, “Let food be thy medicine, and let medicine be thy food.” Eatlocalchallenge.com
Sure beats the heck out of $50,000 heart surgery. Do I hear an Amen?
We can help ourselves to the earth, but don’t take too much. Dominion is subjective. The queen of England has dominion over her subjects, but she doesn’t eat them. I can't remember where I heard that.
Eat Right, Now!
Chef Wendell
www.wendellfowler.com
Posted by Eat Right Now with Chef Wendell at 1:11 PM No comments: